Near the border of South Los Angeles and Culver City, developers Frederick and Laurie Samitaur Smith plan on making a statement.

The couple, who helped transform the surrounding area into a hub for unique architecture, envisions yet another cutting-edge structure: an eccentric 17-story office tower with steel ribbons wrapped around floor-to-ceiling glass windows.

“I believe it will be a demonstrative statement of innovation,” said Frederick Samitaur Smith. ”There is a lot of innovation, hope and aspiration in that one building.”

The unique features are many.

They include steel bands that will cover the buildings exterior like a spider-web. And the structures — not interior columns — will support the tower, serving as an exoskeleton. Floors will have varying heights and the elevator will be attached to the side of the building so not to waste space in the tower’s center.

Those features will give tenants a dramatic opportunity to design their own offices. Such flexibility is increasingly coveted by companies and also a rarity in high-rise towers, which are known for their uniformity.

“The floor is entirely open. There are no columns,” said architect Eric Owen Moss, who designed the West Adams project. ”You can come in and invent anything you want.”

No leases have been signed, but Laurie Samitaur Smith said the building is likely to be filled by tech, entertainment and design firms that “are at the highest level of the creative industries of our time.”

The developers are asking $4 a-square-foot per month — a rate that puts the building on the higher end for an area where an office can be leased for $3 a square foot, said Micheal Geller, executive vice president with First Property Realty Corp.

Geller, who is handling leasing for the roughly 160,000-square-feet building, said he can get a premium because of the unique architecture and the fact it will be a tower with sweeping views. Most so-called creative buildings are typically rehabs of only one to three stories.

“People will pay more for the high quality,” Geller said. “Here you have a building that can impact the culture in a very unique way. It’s just a cool vibe and people want to go to work there. It becomes a recruiting tool.”

Called the (W)rapper and spelled with parentheses, the building’s name alludes to both cutting edge rap music and the fact the steel bands wrap the building, Moss said.

Joyce Hwang, an architecture professor at the University at Buffalo, described the steel ribbons as a “fantastical” structure that gives the following impression: “Wow! What is that?”

“It looks decorative. It looks like it’s hanging off the building, when it’s really the structure,” said Hwang, who was a juror in an award-competition the project won last year.

Tom Wiscombe, an architect not involved in the project, called the building “whimsical or almost cartoonish.”

The tower at the corner of National and Jefferson boulevards has long been in the works.

It’s been repeatably delayed given the difficulty gaining city approvals for the structure, because of its unique exoskeleton, said Frederick Samitaur Smith.

The project team says they expect to finalize building permits by the end of the year and break ground within four months.

Frederick Samitaur Smith said he still must finalize his financing, but declined to answer further questions about it or disclose the project’s budget.

Costs are likely greater than a typical office building, where developers save money by building in a uniform fashion — one identical floor stacked on the next.

“There is probably a solid 20%  premium in something like the (W)rapper versus a corporate glass box,” — both in construction costs and rents, Geller said.

In 2006, the development received an $11-million federal loan and grant for land acquisition and pre-development costs under a program meant to help cities redevelop abandoned and underused industrial sites — a testament to how the area has changed.

This corner of South L.A. struggled to attract investment following the 1992 riots, but investment dollars have started to flow during today’s hot real estate market, and projects planned include a 30-story tower at the corner of La Cienega and Jefferson boulevards.

When the Samitaur Smiths first got started in area, such projects would have been laughed at by the development community.

The area was a rundown industrial zone that stretched from South Los Angeles into what is known as Culver City’s Hayden Tract, which was developed in the 1940s by glass manufacturer Sam Hayden.

By “the early ’90s, it was a bunch of beat-up warehouses,” said Jim Jacobsen of real estate brokerage Industry Partners. “There was a lot vacant.”

To change that, the Samitaur Smiths partnered with Eric Owen Moss Architects. The partnership played a key role in reviving the Hayden Tract, which is just across Ballona Creek from where the (W)rapper will go.

Today, the former industrial area along National Boulevard is a well-known hub for architecture, entertainment and technology firms, and is served by the Expo Line light-rail.

Among the unique buildings Eric Owen Moss Architects and Samitaur Constructs have created together are an office building in the shape of a beehive and an observation tower that looks like the bent leg of an armored medieval knight.

Tenants in Hayden Tract buildings owned by Samitaur and others include Nike, Beats By Dre and Anonymous Content, a producer behind the Oscar winning film “Spotlight.”

Hip restaurants are moving in as well, making the area increasingly more than just an office park.

“We started trying to do an economic turn around here, and we very much utilized architecture to be part of that symbol of change, positive change, radical change,” said Laurie Samitaur Smith.

In addition to their work in Culver City, the couple developed several other office projects within a short walking distance just across the border in Los Angeles. They call their entire holdings in the area Conjunctive Points.

The Los Angeles side will be home to the (W)rapper.

That area, where co-working firm WeWork recently opened an office, serves as an extension of the Hayden Tract, but is far sleepier.

With their new building, the Samitaur Smiths and Moss want to make the Los Angeles side just as lively as across the border in Culver City.

The (W)rapper, Laurie Samitaur Smith said, “is an extension of the work we already began in the late 80s.” 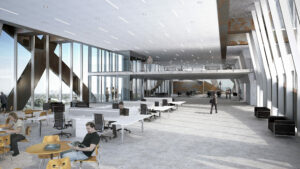 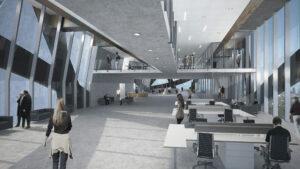