Also scheduled for completion in 2020 is the $935 million expansion of the Las Vegas Convention Center. The project will add 1.4 million square feet of new space, which includes a 600,000-square-foot exhibition hall. The convention center’s general contractor, the joint venture of Turner Construction and Martin-Harris Construction, will even be working overnight on designated days of the week for the duration of construction in order to meet its aggressive timeline.

But other projects nearby are building their own conference and meeting spaces as well in an effort to cash in on the lucrative convention and trade show business. Luxury resorts are especially primed to tap into this market since convention organizers often prioritize potential convention sites by what type of full-service hotel accommodations are on site or close by.

The Drew Las Vegas, a $2.5 billion resort hotel project underway in Las Vegas, will be complete in 2020. Not only will the hotel likely host some conventioneers from the Las Vegas Convention Center but it will be able to accommodate meetings of its own in 500,000 square feet of conference space. The resort will also offer nearly 4,000 rooms, a casino, entertainment, retail and an 8-acre pool deck.

The under-construction, $4 billion Resorts World Las Vegas is slated to feature its own convention center in addition to 7,000 rooms, a movie theater and a host of other amenities, but the exterior had to undergo an unplanned renovation. Wynn Resorts sued Resorts World for trademark infringement, alleging that its exterior was designed to capitalize on the distinctive Wynn hotel design. Last week, Wynn and Resorts World owner Genting announced that they had settled their dispute, with Genting agreeing to make some changes to its exterior. 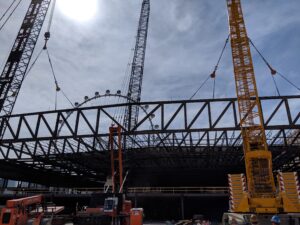